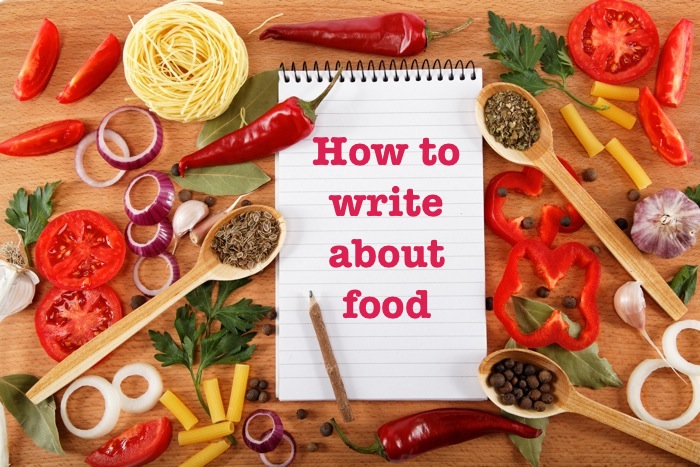 Have you ever wanted to write about food? Award-winning food writer and journalist Andrew Webb shares his advice for capturing the culinary.

Food literature can be hard to categorize. Consequently bookshops struggle with exactly where to place such books on the shelves. This I know from bitter experience. All too often they get lumped in somewhere with the huge £25 hardback, recipe-led, TV-series-supporting tomes featuring gurning chefs looking slightly to one side on the cover. Food writing books then, are like remora fish, swimming along stuck to the bellies of much bigger beasts.

But the beauty of ‘food writing’ is that because it straddles so many other genres (food and travel, food and memoir, food and journalism, food and history – even food and fiction) it gives authors a huge area to explore. Also, as we become more ‘food literate’,  some readers begin to seek out more context, more depth, and more story. All food writing, though, boils down to one of two approaches: either ‘I’ve led a fascinating life and here’s my amazing story’; or ‘I’ve put in loads of research and here’s an amazing story’. So which one are you? 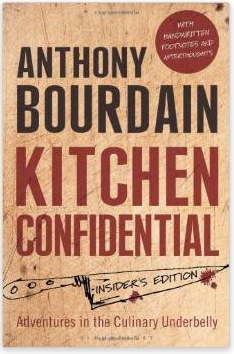 Anthony Bourdain’s Kitchen Confidential was a watershed in 2000. A book that described the visceral pleasures of eating as much as it did the physical and mental abuse of working in a restaurant kitchen, contained not a single recipe. Since then many a chef has followed suit, each a dilution of that original idea. There is no more defunct sub-genre than the testosterone and booze-fuelled if-you-can’t-stand-the-heat-get-out-of-the-kitchen book. Because no one – especially in England – will ever beat Bourdain.

Unless you’re doing heroin at the pass, you’re always going to be second fiddle. Even Marco Pierre White’s White Heat, which actually came out 10 years before Kitchen Confidential and even contained some recipes, failed to have the impact of Bourdain’s book on British chefs. I guess things were different in the ‘90s.

The ballsy chef memoir is perhaps the best-known non-recipe food book. But there are stories everywhere. A good example of this is Maynard Davis’s Adventures of a Bacon Curer. Here’s what its publisher had to say:

Maynard’s manuscript sat on my desk for several weeks before I got round to the task of, as I thought, rejecting it. It looked like an ape’s breakfast and I felt sure it would never make any money. But I was touched at the thought of a now-elderly bacon curing apprentice and his life story, and felt that out of courtesy, I would read a couple of chapters in order to write a fair rejection letter. I took it home with me that night. By 3am I was still reading.

It is indeed, a charming book. For me, the best bit is where some big shot local who wants to buy Mynard’s van gets his comeuppance after not selling Mynard a sports car years earlier. They say revenge is a dish best served cold, but this is revenge that’s not only cold, but salted, wrapped in cloth and matured in the cellar of Maynard’s heart for years.
The point is, you have to have something interesting to say . The same applies for another popular sub-genre, food and travel. Your story had better be interesting. Your sabbatical tour of Tuscan vineyards isn’t really going to cut it. You’ve got to blaze a trail. 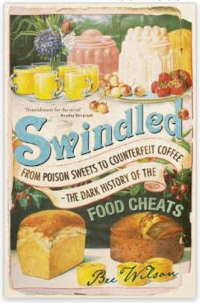 The other approach is the expertly researched angle, the person who has tended a vegetable plot for years, the girl who simply likes gin. This isn’t to say that there’s no room for personal experience in these sorts of books, but it tends to take a back seat to the meticulous research, interviews and hard-learned facts and experience.

I actually love books like this. Good examples include Bee Wilson’s excellent Swindled: From poison sweets to counterfeit coffee – the dark history of the food cheats.

Food writing is still writing. Whichever route you decide to take, remember, food writing is still writing. You’ve got to be good at it, be able to craft a turn of phrase, create that memory or image in your reader’s mind, wow them with your knowledge and experience. You don’t , , necessarily need to be able to spell, a good copy editor can easily sort that out (this too I know from bitter experience).

Sum up your idea succinctly. The most important thing is a good idea and, after that, it’s a thick skin and a little bit of luck. TV people talk of the ‘elevator pitch’, but your idea doesn’t have to be as short as that. However, you do need to be able to sum it up succinctly. What we’re seeing more of now, in both books and on channels such as BBC Four, is the short title with a longer sub head, e.g. Carved with Love: The Genius of British Woodwork. or Bee Wilson’s lovely Consider the Fork: A History of How We Cook and Eat, or Eric Schlosser’s Fast Food Nation: What The All-American Meal is Doing to the World. Contrast this with a title like Offal and the New Brutalism from 1985, and you get the picture. The latter is a really interesting book though, being a collection of short essays and stories and a window on the food scene in 1980s London.

Andrew Webb is an award-winning food writer and journalist. His books include Food Britannia (winner of the Guild of Food Writers award), the Men's Pie Manual, Men's Baking Manual and the Meat Manual. He has appeared on BBC Radio, Channel 4, UKTV, The Guardian, AOL and lovefood.com (of which he was the editor). His print work includes The FT, Waitrose Kitchen and delicious. magazines. He's also judged the British Pie Awards, reviewed restaurants, and spoken at food festivals, and so knows a good plate of food when he sees it. Visit www.foodjournalist.co.uk for more information or follow him on Twitter at @foodjournalist.

How social media is changing language 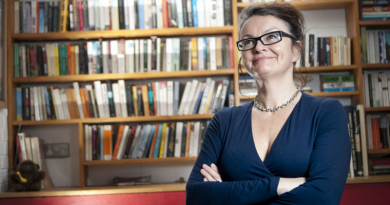 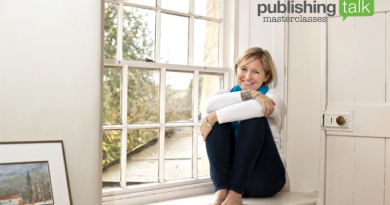 MASTERCLASS: How to Create a Setting – with Liz Fenwick